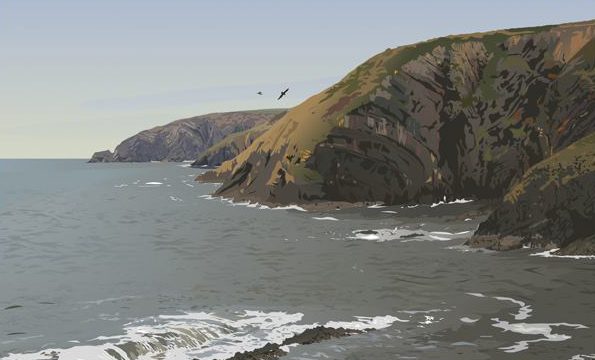 26th May 1904 CARDIGAN BAR
“On Sunday last two large boats, filled with sailors, were observed approaching the shore at Ceibwr, Saint Dogmell’s, where the crews soon afterwards landed, and it was then ascertained that they formed the crew of the Swedish schooner Trithiof,” 132 tons burthen, Captain Laro Andersson, bound from Galatz to Gloucester with a cargo of wheat. It appeared from the statement of the captain and crew that the vessel sprung a leak on the 12th instant, passing Cardigan Bay, and after exerting every means in their power to stop it, the captain, finding the water was rapidly gaining upon them, attempted to get into the river by Cardigan Bar, but when within twelve miles of that port the vessel rapidly filled, and the crew had barely time to embark in the boats when the vessel suddenly went down. Fortunately the weather was calm, and the boats were able to reach Ceibwr in safety. “ newspapers.library.wales

This is the first part of a series created by Anne drawing directly into the computer and then printed out in a series of limited edition prints. Each piece of work has an associated written piece taken from historical documents about the area, including extracts from a 15th Century letter to the Monks in St Dogmaels abbey and 19th century newspaper reports about fights between rival local fishermen.

All images are available as framed limited edition prints: