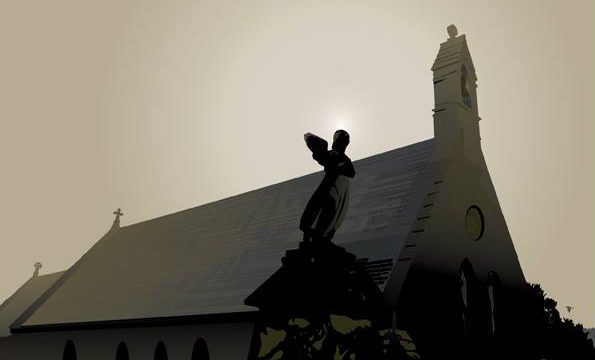 7th April 1904 Welsh Gazette and West Wales Advertiser
When Mr. Fenton visited the old church he saw a square freestone lying loose against the wall.” It was Inscribed:â�� HIe JACET IOHANNES BRADSHAW, ARMIGER, QUI OBIIT ULTIMO DIE MAII, ANNO DOMINI 1538. To-day the visitor sees just one half of this square freestone, on it:â�� IOHANNB ARMIGER MO DIE M 1 1538. I 1 1538. What has become of the missing half no one can tell. I should like to see this relic carefully taken into the church, and secure- ly fastened to the chancel wall, who knows but that the other bit would soon be found? One man on a Saturday afternoon, could easily do this, and should feel it an honour to do the job. It was to John Bradshaw, at the dissolution of the religious houses, this abbey was granted, whose posterity re- sided there for several generations. Then too the glorious SAGRANUS scone might likewise find a resting place in the chancel, where its ogham characters would not be exposed to the weather. Vicar Vincent intended to put it under cover, but died before doing so, This mass of phorphy- ritic greenstone, just seven feet long and tapering up from 12 to 9 inches in breadth, was once tieed as a, stone bridge, but fortun- ately its engraved side waA towards the water and so saved from being foot-worn. Carved “tonee and the like have a nack Ã³E disappearing in tinio, IOC all custodians are not so careful of such treasures as is Vicar Morgan. I wonder if there still be at St. Dogmael’s a mutilated coffin lid, with early Greek cross on it, similar to those found at Margam; or another slab on which only the cross shaft remains; or the slab of the high altar of the Abbey marked with five small crosses. And here for the present at least my story ends. May the men and the women of St. Dogmael’s ever love the shrine set in their midst, a shrine, the still standing walls of which have echoed to the voice of Gerald, whose figure stands out across seven cen- turies, towering above his fellows, as he did in actual life. newspapers.library.wales