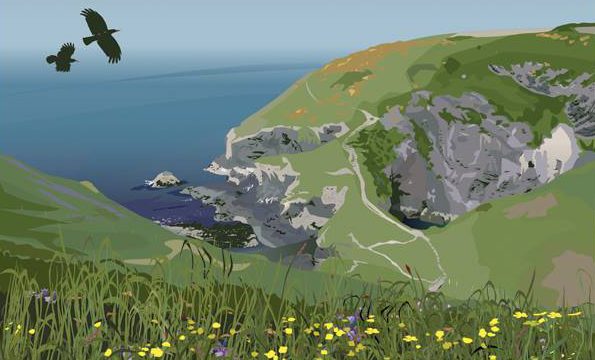 Translation by Lady Charlotte Guest (c. 1375–1425) “And when he had put them to flight, Arthur with his men went forward to the ship, carrying away the cauldron full of Irish money. And he disembarked at the house of Llwydden the son of Kelcoed, at Porth Kerddin in Dyved. And there is the measure of the cauldron.” “Is ” Forth Kerdin” in Moylgrove ? . A. W. Wade-Evans In the summer of 1898, before I had read the Mabinogion, or knew anything of Diwmach Wyddel, I visited Moylegrove for the first time. There I noticed a most weird-looking formation in the cliff, a large cavity into which by some unseen passage the sea entered with every incoming tide. Fenton noticed it on his tour in the first decade of the last century, and this is what he says… ” On the north side [of the pretty little dingle] I observe a curious opening in the cliff, nearly circular, admitting the sea through an arch at bottom, similar to those near St. Goven’s, but not half so capacious.” It is known as ” Pwll y Wrach,” the ” Witch’s Pool” but I very distinctly remember a lady living close by, and who had lived there from childhood, telling me she had always known it in English as ”The Witch’s Cauldron.” The inhabitants say that it is a marvel to see in stormy weather, for in such a time it seethes like a boiling pot. I paid it a subsequent visit on Tuesday, July 22nd last, in company with Mr. John Griffith (Pentrevor). At the first glimpse, and irrespective of the story in the Llyfr Coch, Mr. Griffith felt certain that the old folk must have associated some explanatory legend, a kind of working hypothesis as to the origin and existence of so remarkable an object (as indeed is indicated by its present name).” Archaeologia Cambrensis… Issue : 4 (1904)